The 9 Best Museums in North Dakota! 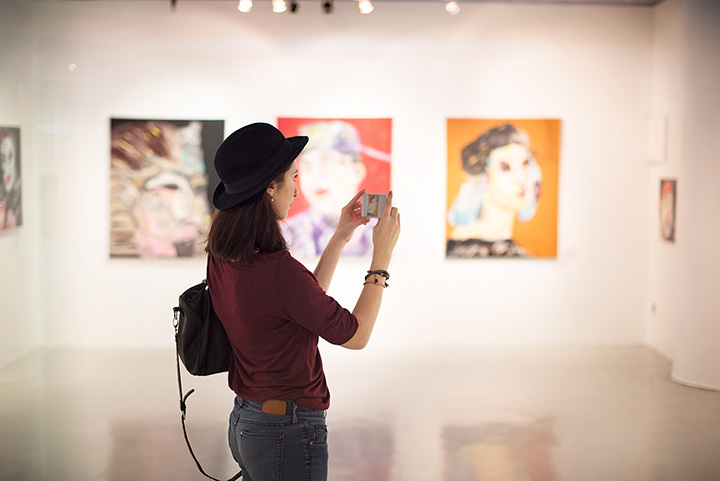 North Dakota may be small, but it is huge when it comes to cultural opportunities. Whether you want to harken back to the days of the Wild West or immerse yourself in the beauty of the majestic badlands, North Dakota has a museum that will be right up your alley. The following museums are worthy of a visit on your next road trip.

Operated by the State Historical Society of North Dakota, the State Museum is North Dakota’s largest. With interactive exhibits that include the “Adaptation Gallery: Geologic Time,” “Innovation Gallery: Early Peoples,” “Inspiration Gallery: Yesterday and Today,” and “Governors Gallery: Green Revolution,” the museum has a plethora of exciting opportunities to learn more about the state and its rich history. For those with small children, the State Museum has a special children’s exhibit area called The Treehouse. Your children will likely to be most drawn, however, to the life-sized casts of a Tyrannosaurus rex and a Triceratops engaged in battle.

Did you know that North Dakota was, until recently, home to the area’s only white buffalo? Although White Cloud was moved to a private caretaker’s farm in 2016 due to her specialized needs, her legacy lives on through the museum. Not only are white buffalo considered sacred by Native Americans, local lore was that those traveling past the buffalo herd would receive a year of good luck if they could spot White Cloud. Even though the famous albino buffalo is no longer present at the museum, at least during the summer months, the museum still maintains 25-30 buffalo on their grounds. The Buffalo Museum’s exhibits focus on the history of the buffalo and the Plains Indians that were the original residents of the area. With a mix of artwork and artifacts, the museum tells the tale of life in the 19th century. The grounds are also home to the “World’s Largest Buffalo,” one of the best photo opportunities in the state.

For the aviation buffs in your group, a visit to the Fargo Air Museum is in order. Home to aircraft from all era, including the Global Hawk unmanned reconnaissance drone and a highly-accurate recreation of the Wright Brothers’ flyer, the museum is a treasure trove of aviation artifacts, military memorabilia, and interactive exhibits. It is also home to the Midwest’s largest aviation library and an extensive gift shop. The Air Museum sponsors a variety of special events, so plan your visit accordingly.

One of the largest museums in the state, the Plains Art Museum is a must-stop for anyone visiting the region. With an ever-changing myriad of exhibits, the museum combines historical artistic renderings with current artistic trends and interpretations. Housed in a renovated turn-of-the-century warehouse that is as impressive as the art it contains, a visit to the museum is exhilarating on multiple levels. In addition to the approximately 4,000 works that are a part of the Plains Art’s permanent exhibit, the museum hosts 12 special exhibitions each year, along with many smaller exhibits interspersed throughout. The Plains Art Museum is dedicated to the support of creativity within the artistic community and beyond. The Katherine Kilbourne Burgum Center for Creativity is a multipurpose art facility that hosts a selection of classes for everyone in the community.

Calling all cowboys and cowgirls. The North Dakota Cowboy Hall of Fame is where Native American history meets ranching and rodeo. The 15,000 square-foot building houses permanent and traveling western culture exhibits, a Hall of Honorees, theatre, gift shop, and a 5,000 square-foot open-air patio. From writer Louis L'Amour to “Great Westerner” Teddy Roosevelt, the Hall of Honorees is a virtual who’s who in North Dakota history. The museum is also a supporter/participant in Medora’s famous “Old Fashioned Cowboy Christmas,” which is held annually toward the middle of December. The event truly gives you the opportunity to step back in time and celebrate the holidays as they did in the Wild, Wild West.

The Midwest was built around the railroad, and the North Dakota Railroad Museum pays homage to that history. Located on four acres of land in Northwest Mandan, the museum includes a wide variety of railroad related equipment, include a bridge, speeder shacks, a coaling bucket, tracks, and of course, train cars. The museum also includes a vast collection of literature and memorabilia. Plan to spend a good amount of time on the grounds. There is a lot to take in.

The brainchild of local farmer and collector Paul Broste, the museum has been called the most extensive rock collection in North Dakota. In addition, Jake Jacobson, another local collector, donated a unique collection of Native American artifacts to elevate the quality of the museum even higher. Not only is the collection one of the best in the country, it is housed in a structure that is completely made of hand-cut, polished granite. To say that the rock museum was a labor of love is an understatement.

Located in the northeastern corner of North Dakota, the Pembina State Museum may not be as well-known as its larger counterparts, but it is a thrilling museum nonetheless. With a rich Native American heritage in the area, the museum pays homage to the Ojibwa, Dakota, Assiniboine, and Cree tribes. The area was also an important fur trade post, which adds another dimension to the museum’s artifacts. One of the most stunning parts of the museum is likely its observation tour, which stands seven stories above the ground and offers visitors a 360-degree view for up to ten miles.

Located in Grand Forks, the North Dakota Museum of Art is the State of North Dakota’s official museum. One of the largest art collections in the area, the museum features a deft combination of historical artifacts and contemporary art in a variety of mediums. The 16,000-square-foot building includes three exhibition galleries and a video information room. The museum also has an extensive education program that includes numerous art-related classes that are appropriate for budding artists of all ages and skill levels. Individual and group tours are available regularly.

102 Highway 2 South East, Rugby, ND
About Us: Prairie Village Museum was established in 1964 and is currently operated under the Geographical Center Historical Society. The Historica... Read More

321 Third Avenue South East, Jamestown, ND
The home of the Stutsman County Memorial Museum was built by George Lutz in 1907.  We are located at 317 3rd St. SE in Jamestown, North Dakota. Read More

500 17th Street South East, Jamestown, ND
The mission of the North Dakota Buffalo Foundation (NDBF) is to foster awareness of the cultural and historical significance of the North American ... Read More

3102 37th Street NorthWest, Mandan, ND
Our hours of operation are from 1 to 5 pm Memorial Day through Labor Day. We have several displays and photos from all the railroads that served No... Read More

52 North Main Street, Garrison, ND
Mission : The Museum will establish a depository for the various records, artifacts, and memorabilia relating not only to firefighters, bu... Read More

19 First Street Northeast, Minot, ND
History:The Railroad Museum of Minot was founded in 1986 as part of the North Dakota Centennial Celebration in the city.  The museum was organ... Read More

50 Main Street, Ellendale, ND
The beautiful and historic Coleman building was given to the Society in 1984 by Lauren and Lucile Coleman's grandchildren.  Dr. Coleman, who w... Read More

100 34th AVE NE, Minot, ND
About Us:The Dakota Territory Air Museum was founded in June of 1986 with the incorporators' dream and desire to provide the most comprehensive avi... Read More

261 Centennial Drive Stop 7305, Grand Forks, ND
Mission:We, as inhabitants of the Northern Great Plains, struggle to ensure that the arts are nourished, and that they flourish, because we know th... Read More

2405 Belmont Road, Grand Forks, ND
The Myra Museum was constructed in 1976 for the Grand Forks County Historical Society, with funds from the Myra Foundation. Its architecture reflec... Read More

1351 West Main Avenue, West Fargo, ND
Mission:The Cass County Historical Society is a non-profit organization made up of members of the community who are dedicated to preserving the his... Read More

805 State Highway 59, Pembina, ND
The Pembina Region:Situated at the northeastern corner of what is now North Dakota, the region around Pembina has been a center of activity for cen... Read More

1201 28th Avenue North, Fargo, ND
About Us:The Children's Museum began in 1985 as a project of the Junior League of Fargo/Moorhead and the Fargo Park District.  Complete renova... Read More
Select a North Dakota town to find
the Best Things-To-Do and Places To Go around you