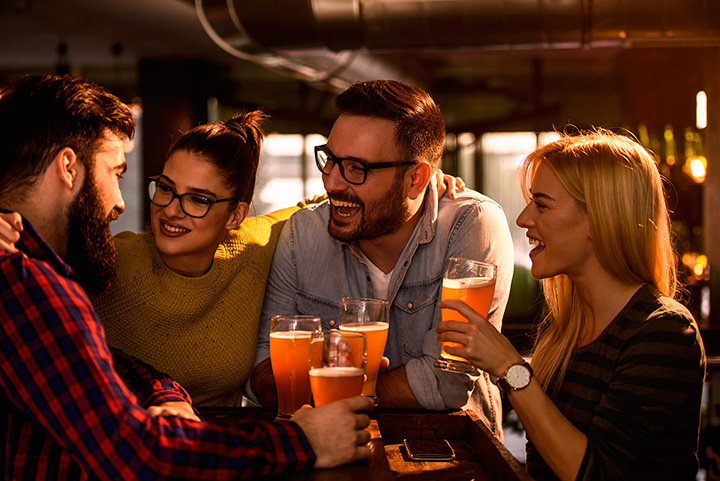 Tired of the same old stuffy bars? Instead, drink in style and comfort at a North Dakota beer garden! Beer gardens are outdoor areas where beer and other drinks are served. Typically, there is also outdoor seating, entertainment, music, and a lively atmosphere. The beer garden tradition originated in Munich, German, but you don’t have to hop on a plane to enjoy a great night at a beer garden. Head to one of the best beer gardens in North Dakota for a unique and refreshing drinking experience.

Luft Rooftop Beer Garden is a cornerstone of the Bismarck foodie scene. This innovative bar is situated on a rooftop, giving bar flies a great view of the hustle and bustle of Bismarck, as well as fresh air. Their drink menu includes a rotating selection of seasonal drafts and if beer isn’t your drink of choice, try one of their creative cocktails like Pickle Rick (Dickel whiskey, pickle juice, lime sour) or Mexicali Blue (pineapple-infused tequila, triple sec, lime, blueberry). The food menu also offers plenty of classic bar food and American cuisine.

Bismarck Brewing turns brewing into an art form. By utilizing traditions while adding their own unique spins, they have become a household name in Bismarck. Not only that, their relaxing taproom is the perfect spot to sip on a beer! Special events, like Oktoberfest are held outside in a beer garden atmosphere, with live music and a friendly but lively atmosphere. The drink menu includes lagers, pilsners, cold fermentation brews, wheat beers, hefeweizens, witbiers, pale ales, India pale ales, stouts, porters, bottled beer, ciders, and other delicious assortments.

Handcrafted beers in a lively environment is what Fargo’s Drekker Brewing Company is all about! Their available beers are constantly changing and adapting so you’ll always find something new at this brewery. If just drinking the beer isn’t enough, take a glimpse behind the curtain on their free guided tour that goes through the entire brewing process. While their inviting tap room isn’t a beer garden, they often host events that incorporate a beer garden atmosphere. Or join their “Bags & Brews League” to play cornhole while drinking beer and listening to music every Monday and Tuesday night!

Granite City Food & Brewing is known for their ice-cold drinks and mouthwatering cuisine. Their signature brews are handcrafted inhouse and include The Duke pale ale, The Bennie bock, Batch 1000 double IPA, The Northern American lager, Prairie Vixen hefeweizen, and the Broad Axe oatmeal stout, with seasonal brews being offered throughout the year. Some of their special events utilize a beer garden.

View more North Dakota Bars and Saloons.
Select a North Dakota town to find
the Best Things-To-Do and Places To Go around you